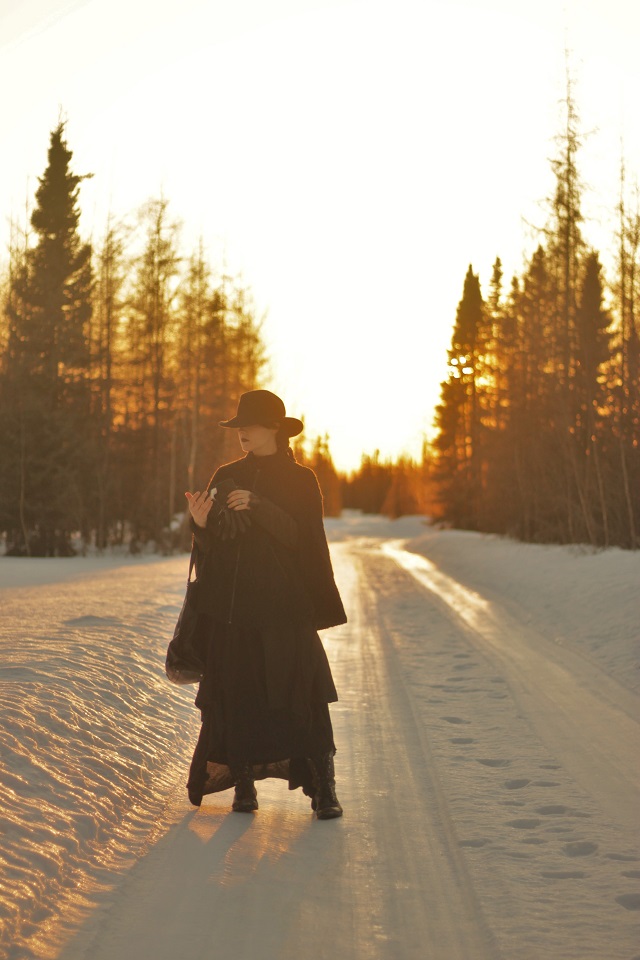 Just layering a bunch of coats, a cardigan and a cape.  I thought I had a good werewolf hunter look going on but nope, my kids said I looked like and evil Mary Poppins or a Krampus.  How they got Krampus from this, I don't know...says the person who thinks this is a good old fashion werewolf hunter lol, ha! 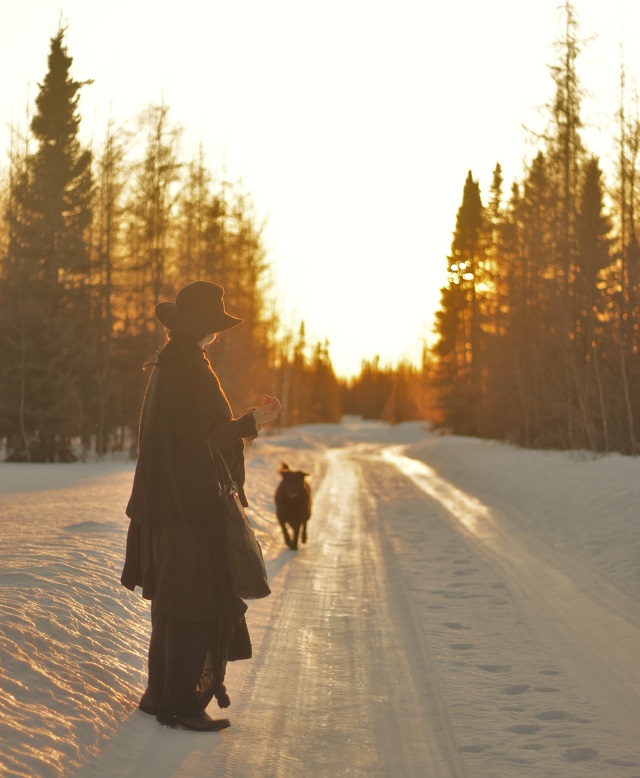 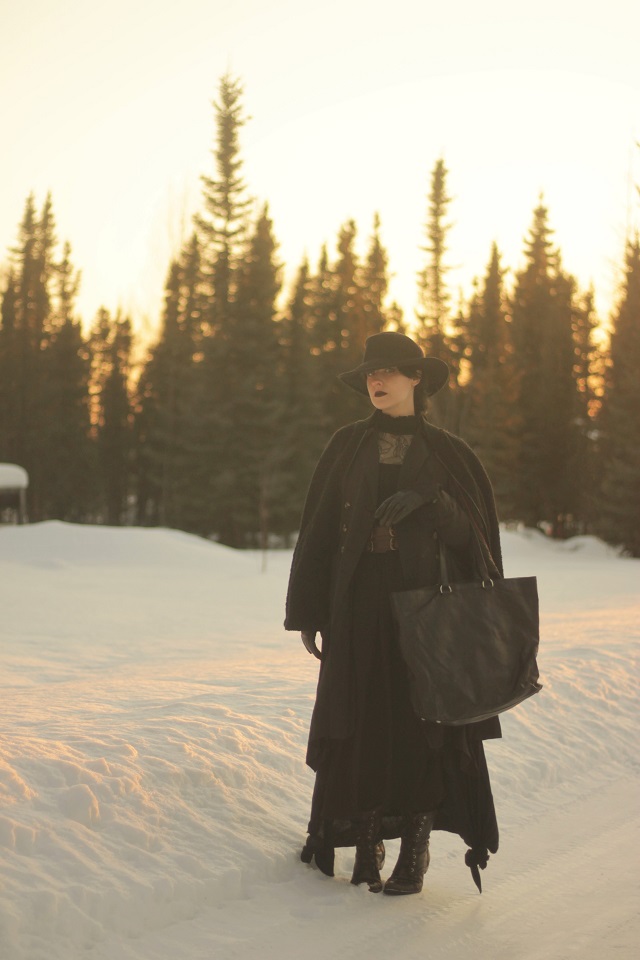 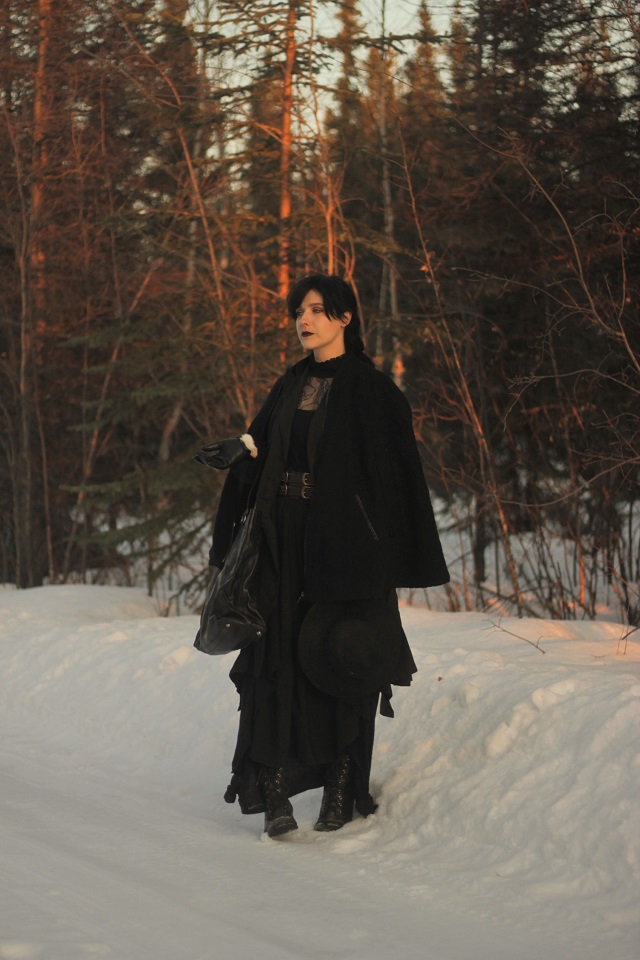 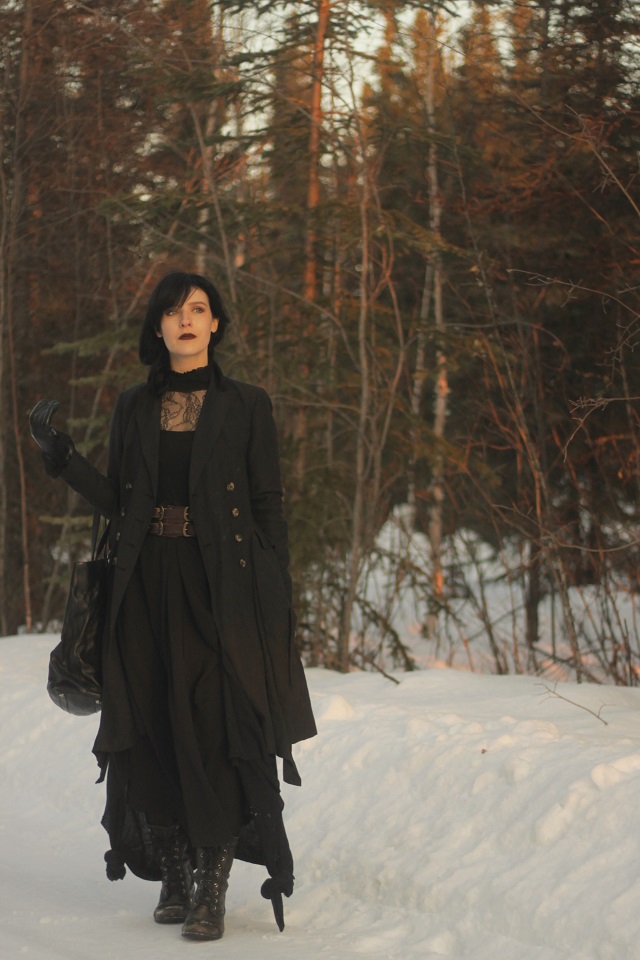 I love the lace top, I feel like it works so well with the black skirt and the cardigan, I really need like a fake corset or a stay to really get the look down though. 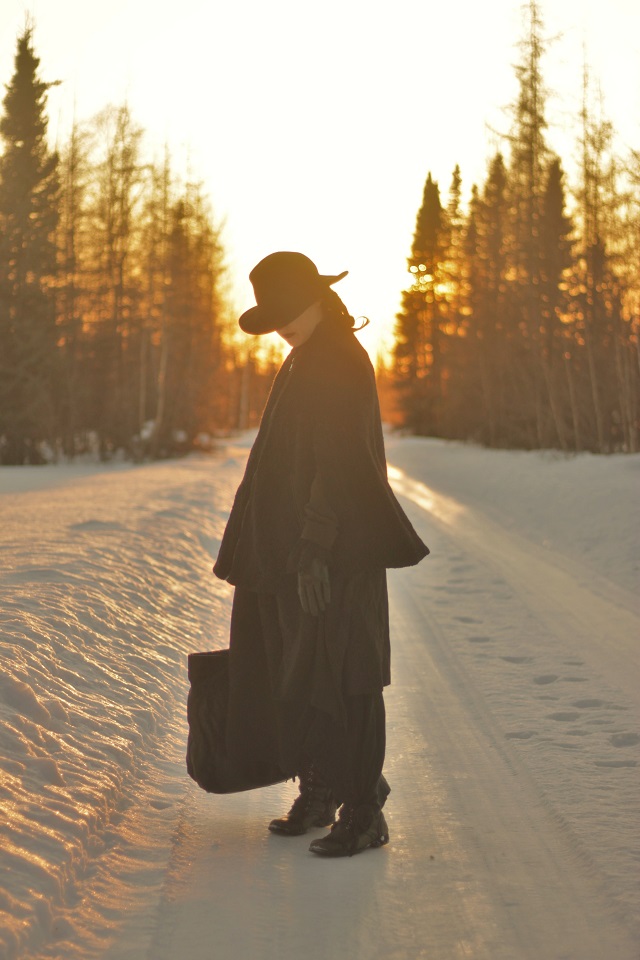 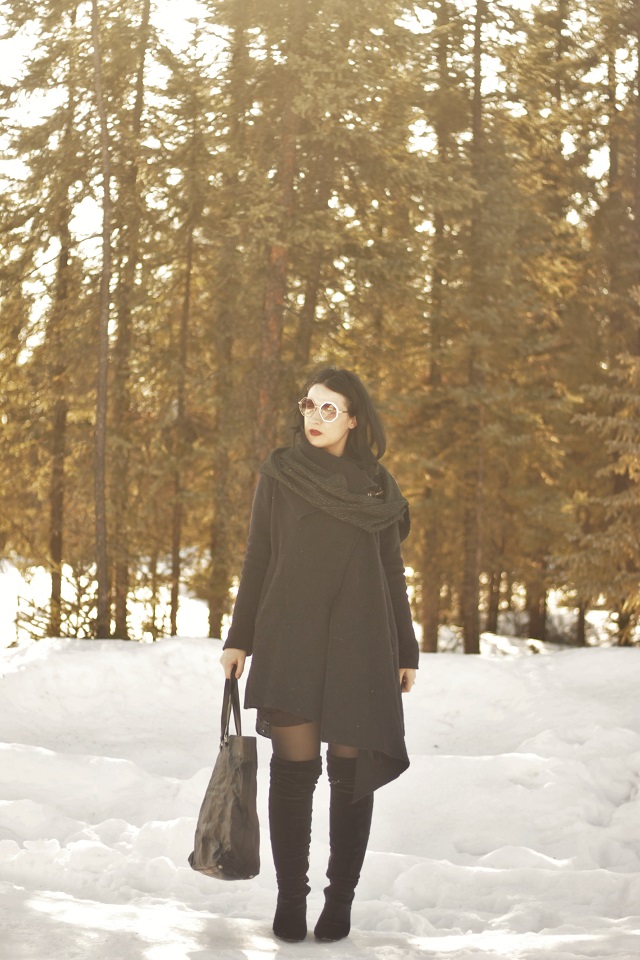 I've had this All Saints dress for so long and just now have an outfit shot with it - that's really not good. The dress is from All Saint's steampunk/fake Victorian era (which was the best in my option) and it's got a cool fake bustle on the back and some beautiful draping. I always blank on what coat to wear with this though, I kind of gave up and wore my usual Monument coat and the Free people hood scarf with it because those are my answer to everything. I think I need to play around with this more and see if I can do a better job styling it. 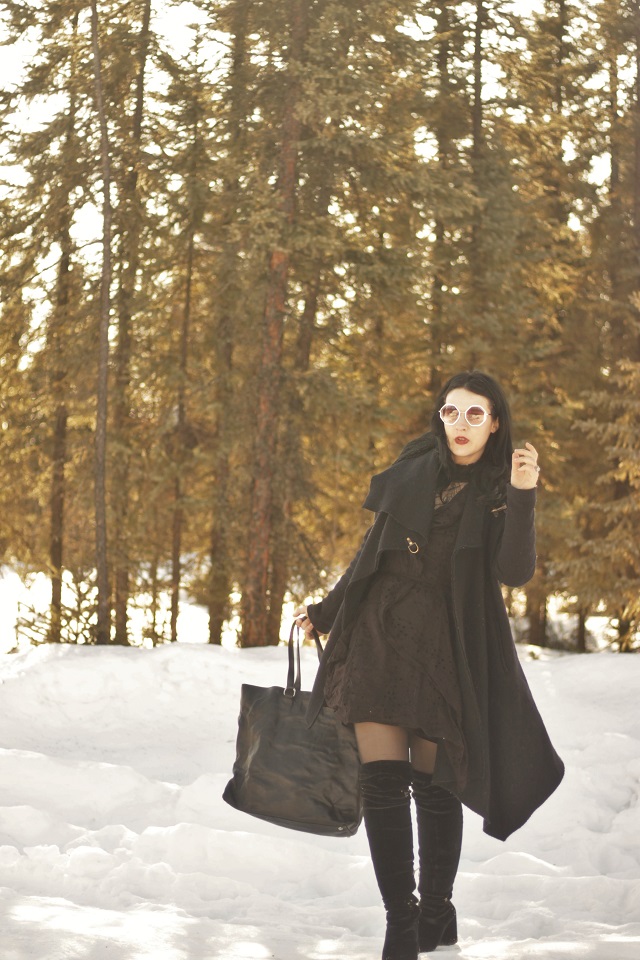 Not a fake dance but a fall-on-my-butt. 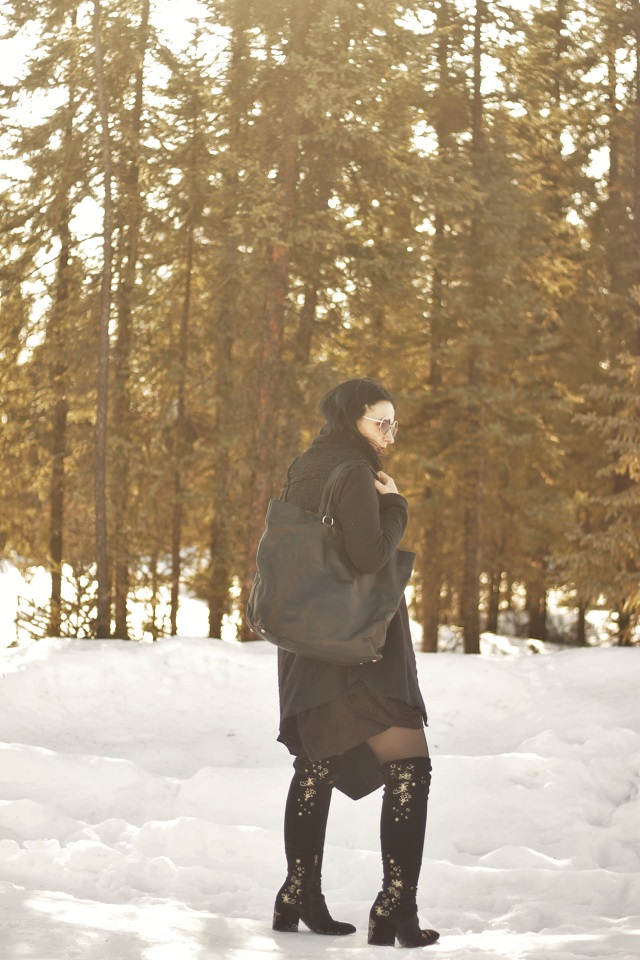 These are the  boots with the stars embroidered up them! I love these boots but the bottoms are SO slick that I haven't worn them a ton this winter. Maybe once that-of-which-shall-not-be-named is over, I'll actually get them in for some non-slip bottoms to be put on. 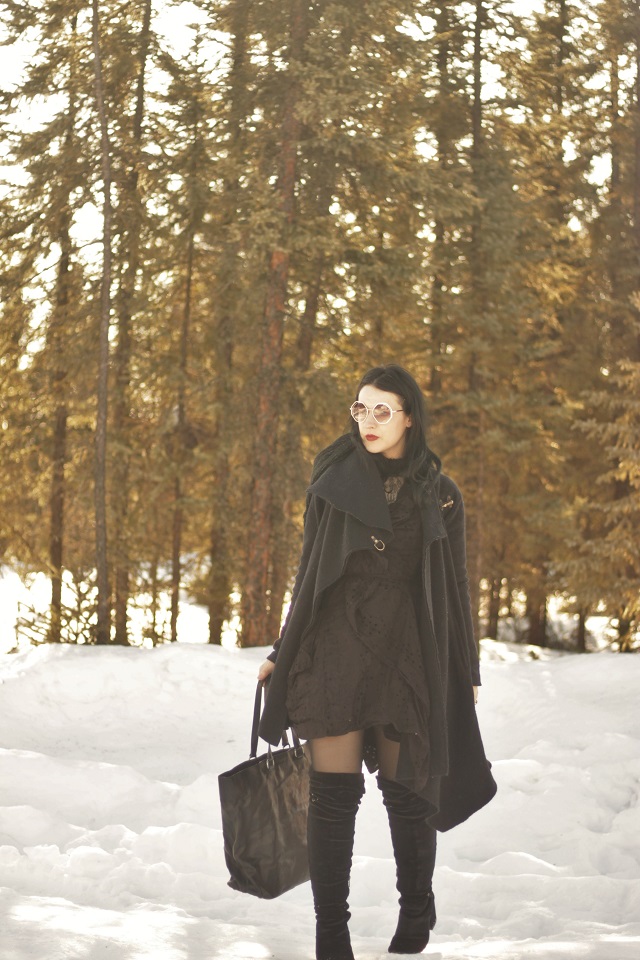 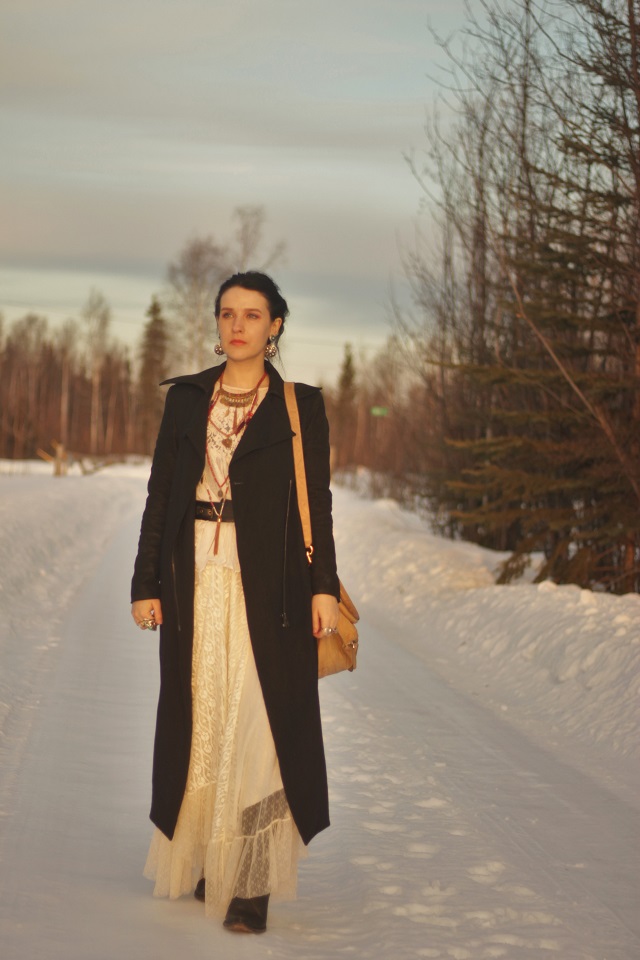 I got one shot and that was it.  This is a big lacey, tulle, Stevie Nicks looking skirt and I lamed out on styling it. It's been so windy and I personally just really hate the wind.  I'll deal with the cold and snow and anything but wind. I did like the long black coat with this and wore too many necklaces as usual. 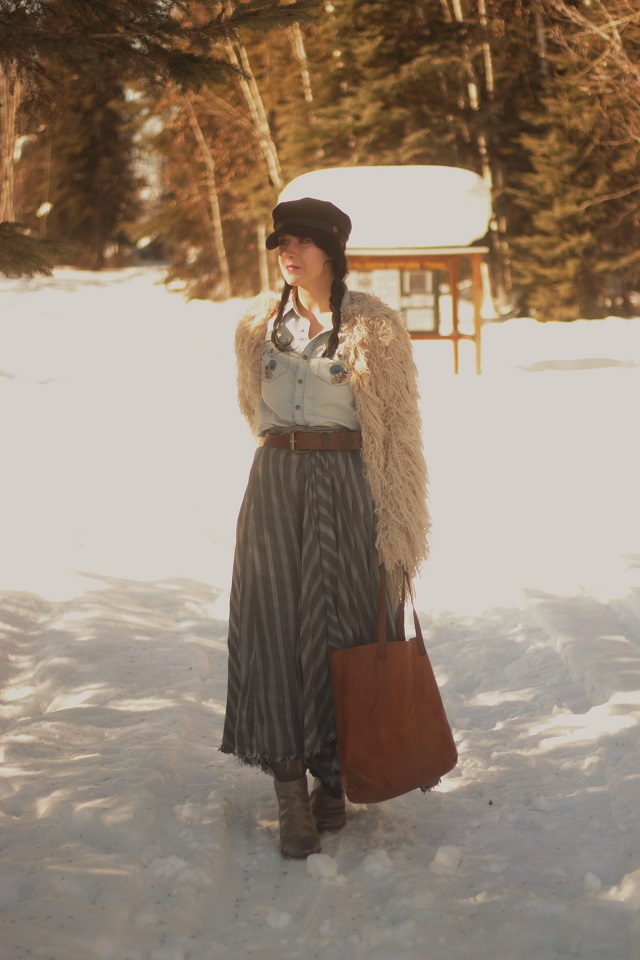 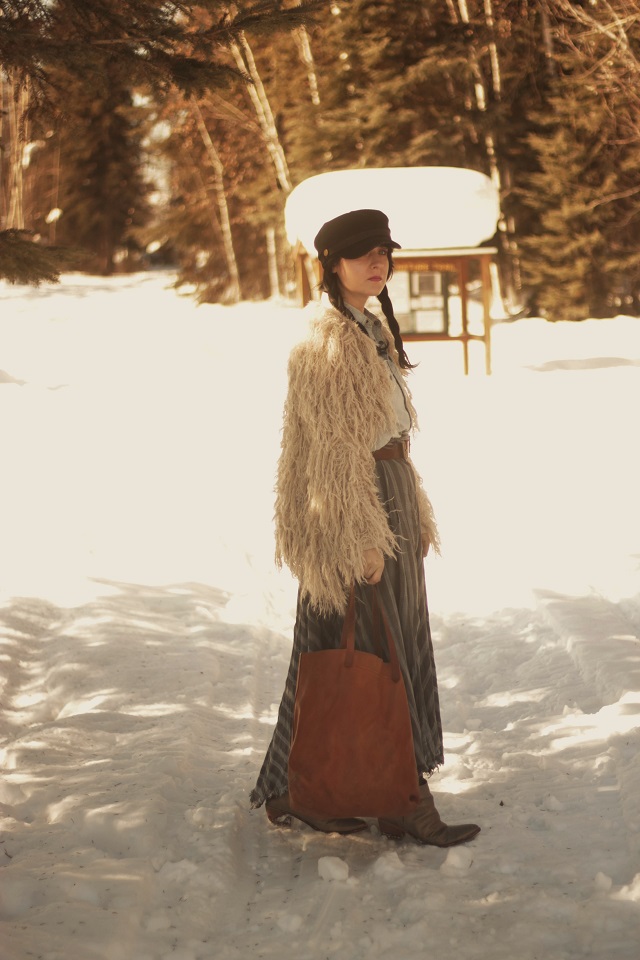 Here you see the Alaskan in their natural habitat, wearing their winter pelt. They're normally quite grouchy at this point in the winter but crinkle a bag of Flaming Hot Cheetos and  they'll stop chewing on your arm.

The big shag coat returns. It's a decent temp now for wearing it and I need to break it out more, it's such a fun garment and I get happy when I wear it. 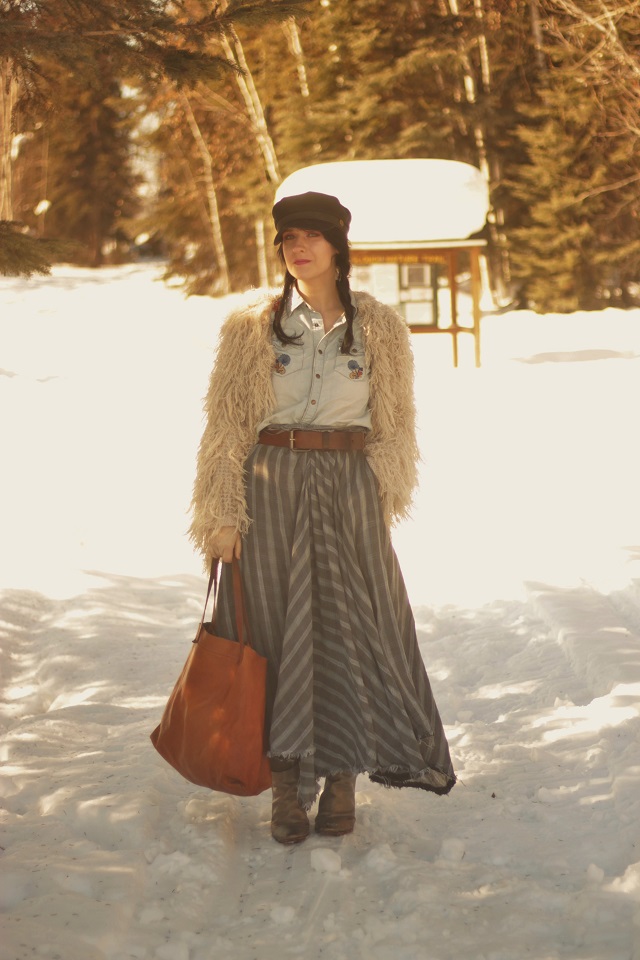 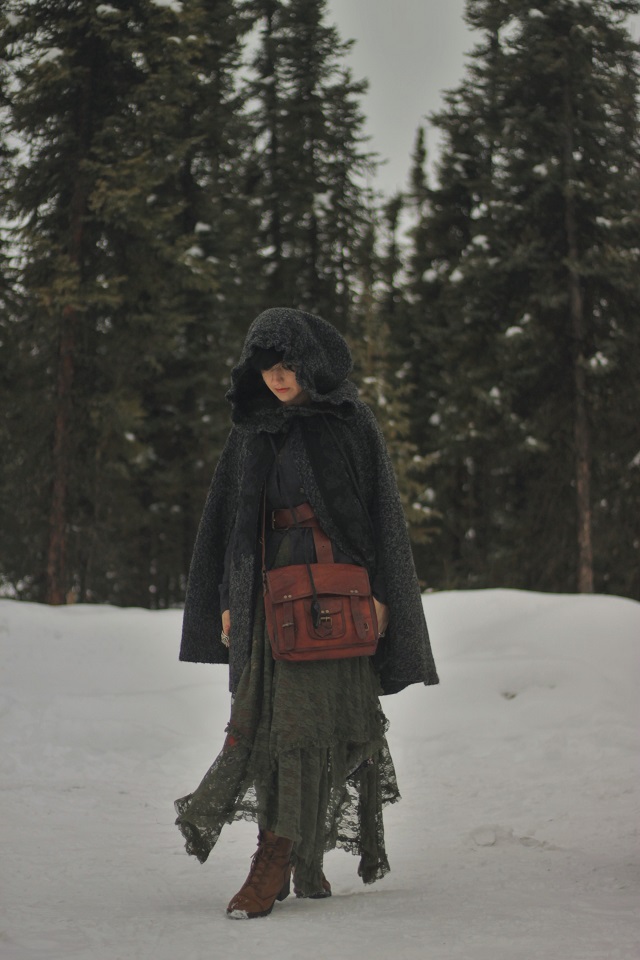 I keep forgetting about this cape and I need to wear it more! I'm not sure I really like the heavier lines of it with the hem on this dress but eh, it's a start. 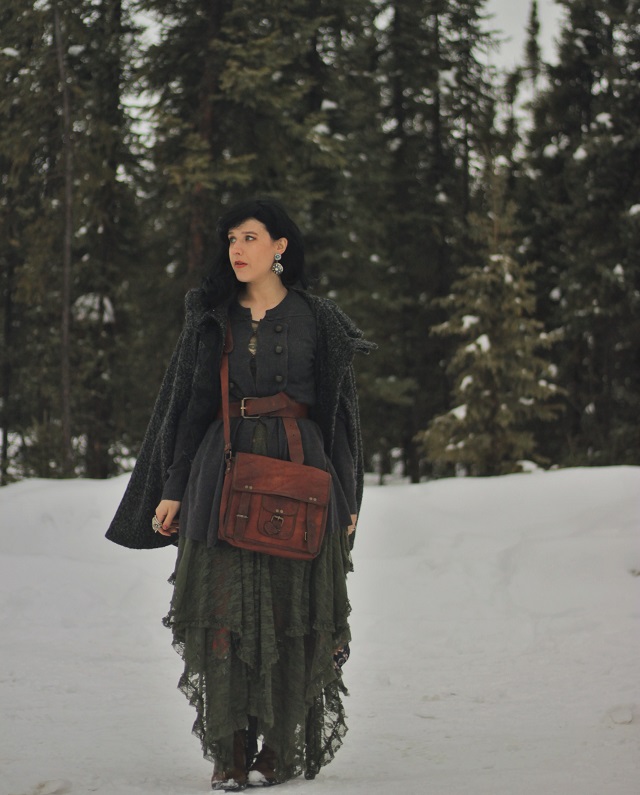 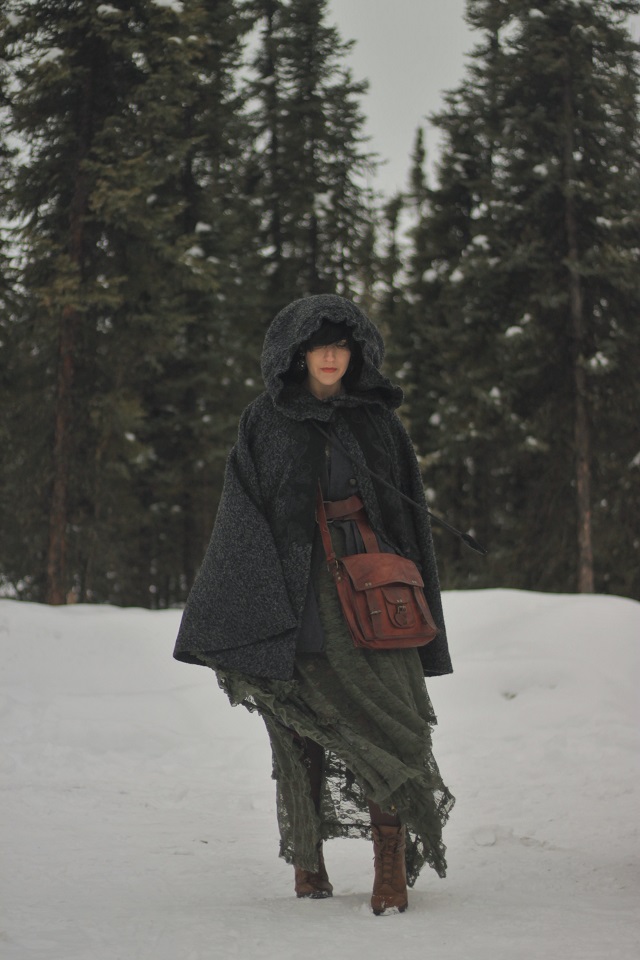 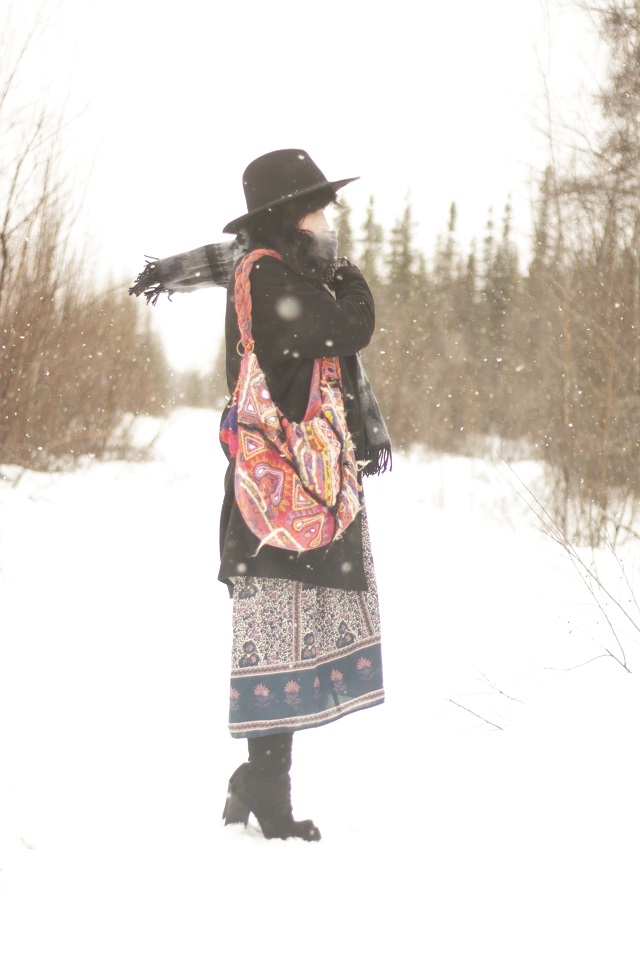 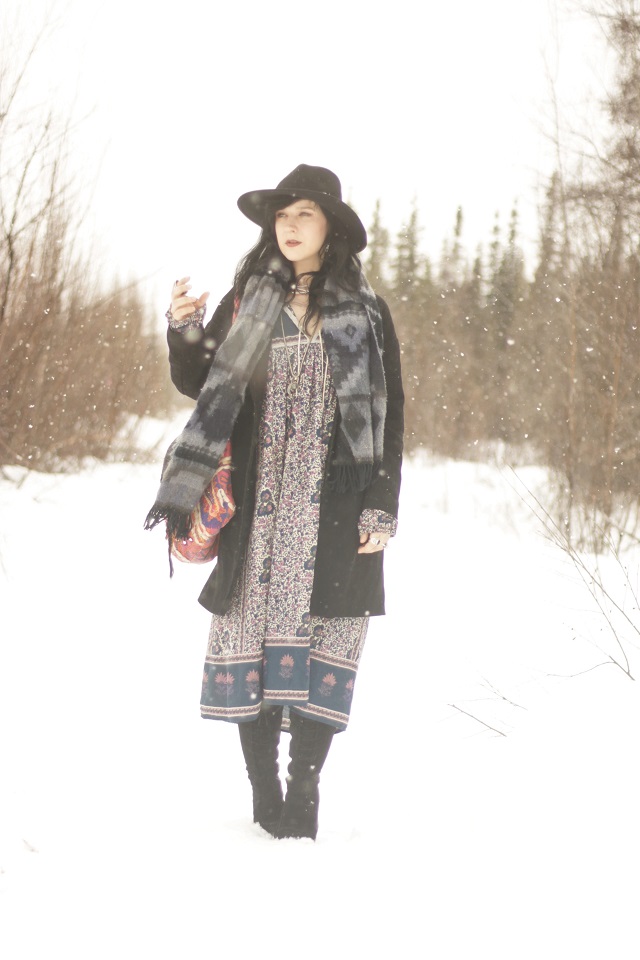 Wearing more stuff I haven't in a while. So fancy just to walk down the drive but I'll admit we're really lucky to live out of town.  We've got some nice little ski loops on our property and that helps with the cabin fever.  When we lived in an apartment in town the winters felt harder, especially the few years where it was -50 for so long and the cars were broken so we were stuck home. (I started this blog during one of those periods, it was so fun to have something to do because we just couldn't go anywhere and it was so cold and being stuck in the tiny apartment was hard.  I really feel for everyone going through that right now because it is hard, especially with the uncertainty and scariness of the Corvid-19 and all of the fallout from it.)

This outfit is basically a copycat outfit from an old blogging buddy who doesn't blog anymore. She use to wear lots of Winter Kate stuff with the Same Eledman ankle boots, boho bags and sharp black coats and it was the coolest. 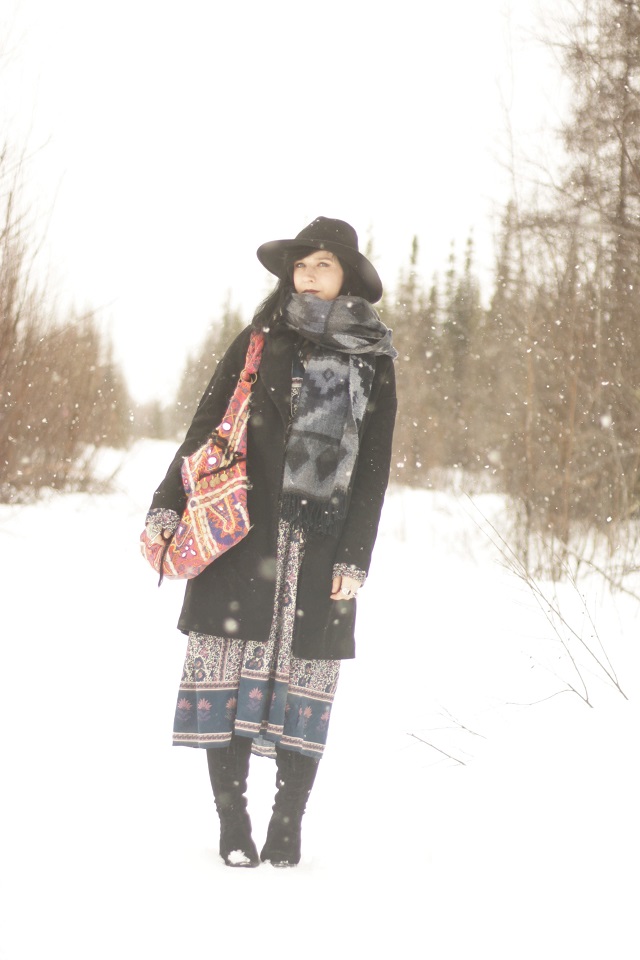 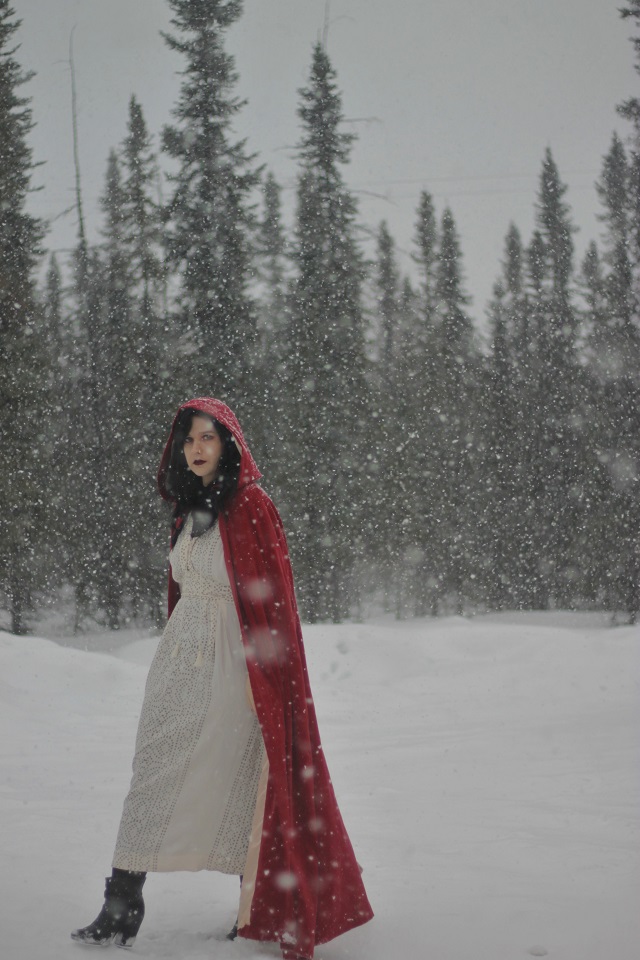 Red Cape.  Really, it might be my favorite cape. (Ssssh, don't tell the others.)  I love it with the white dress, it looks nice and dramatic and what's the point of a long red cape if it isn't dramatic? 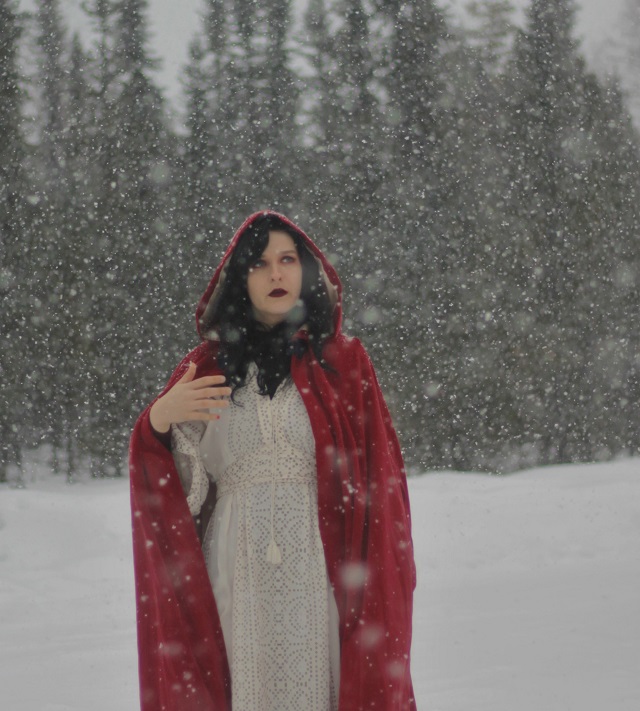 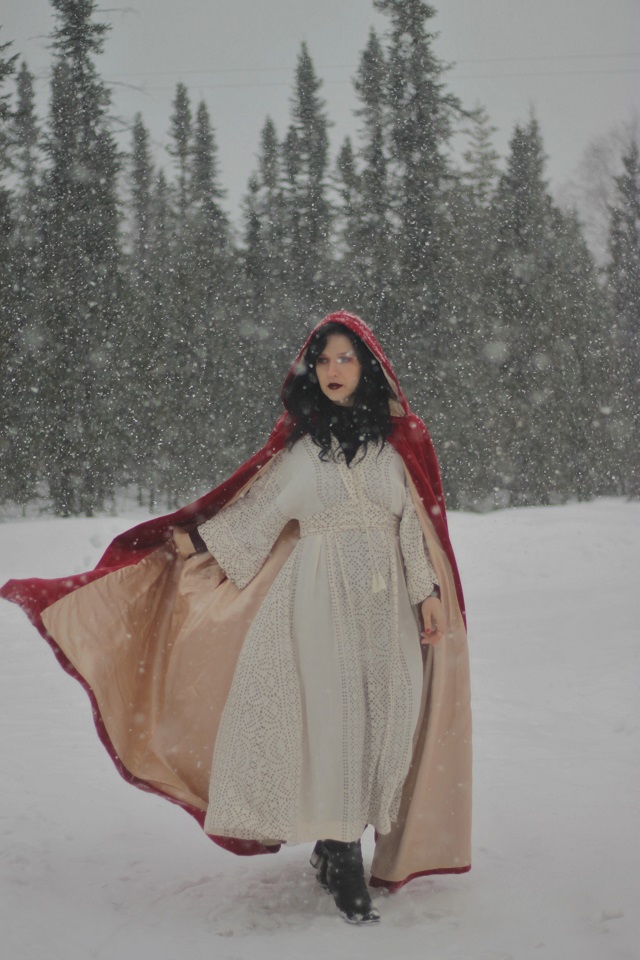 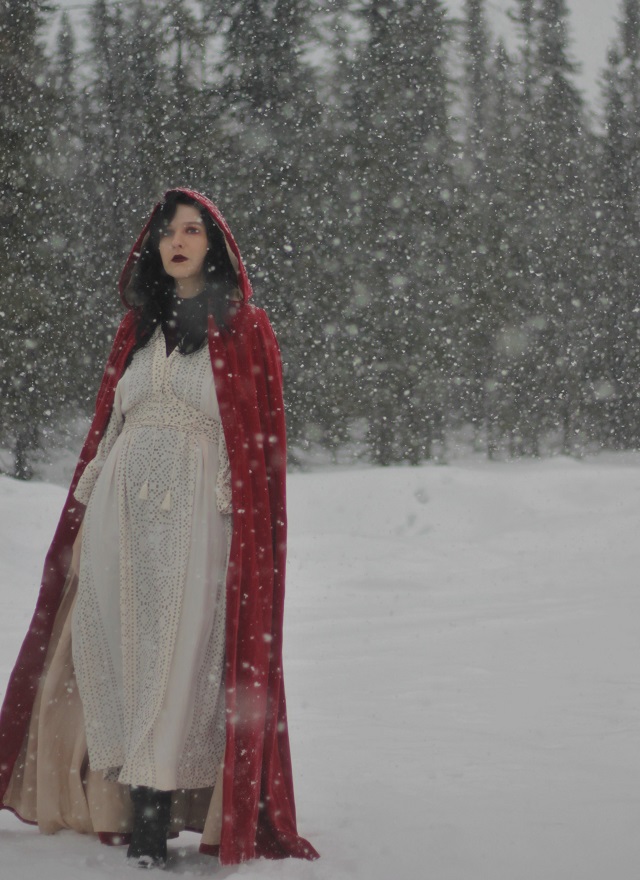 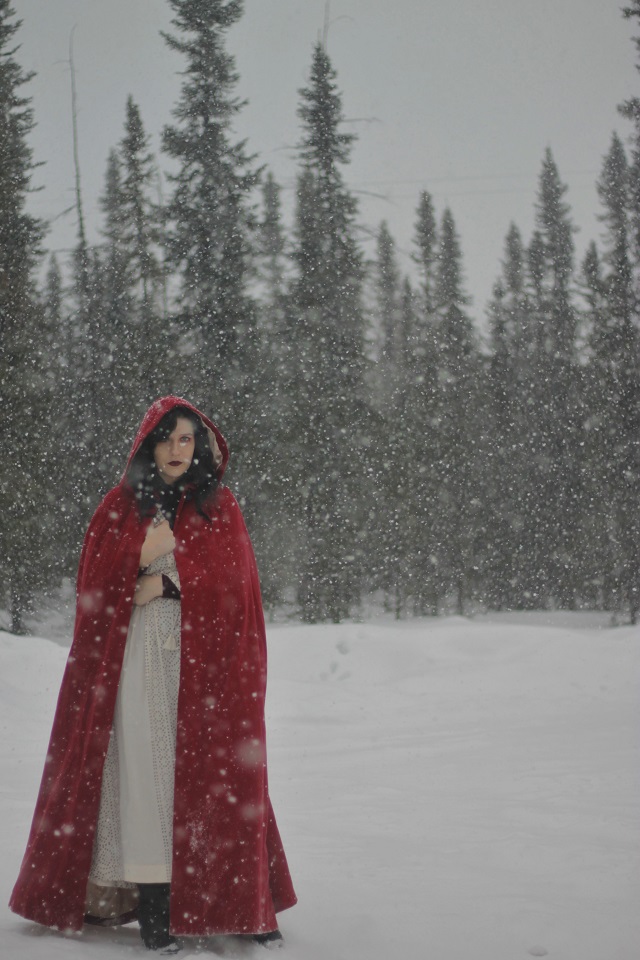 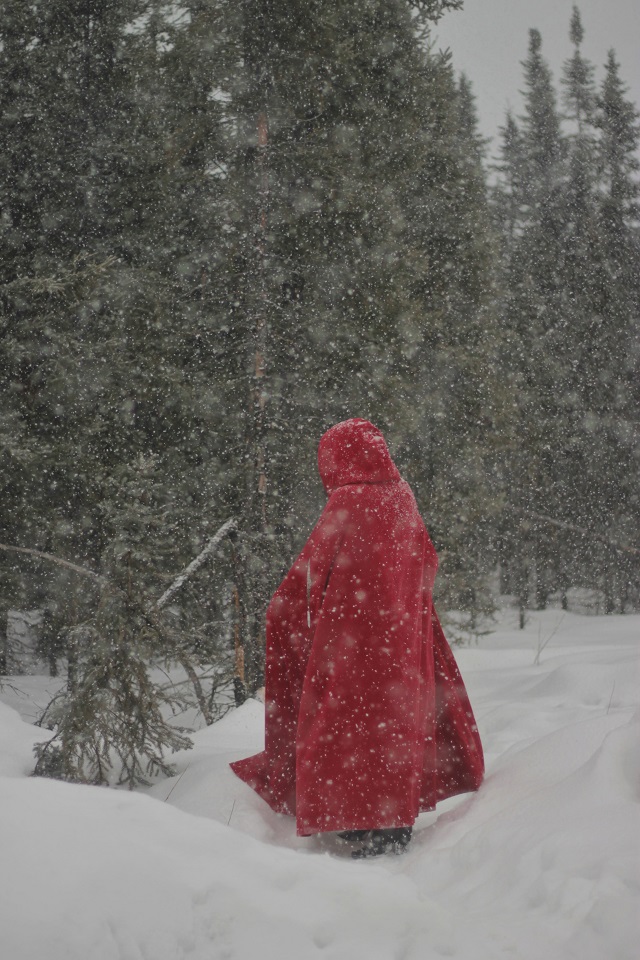 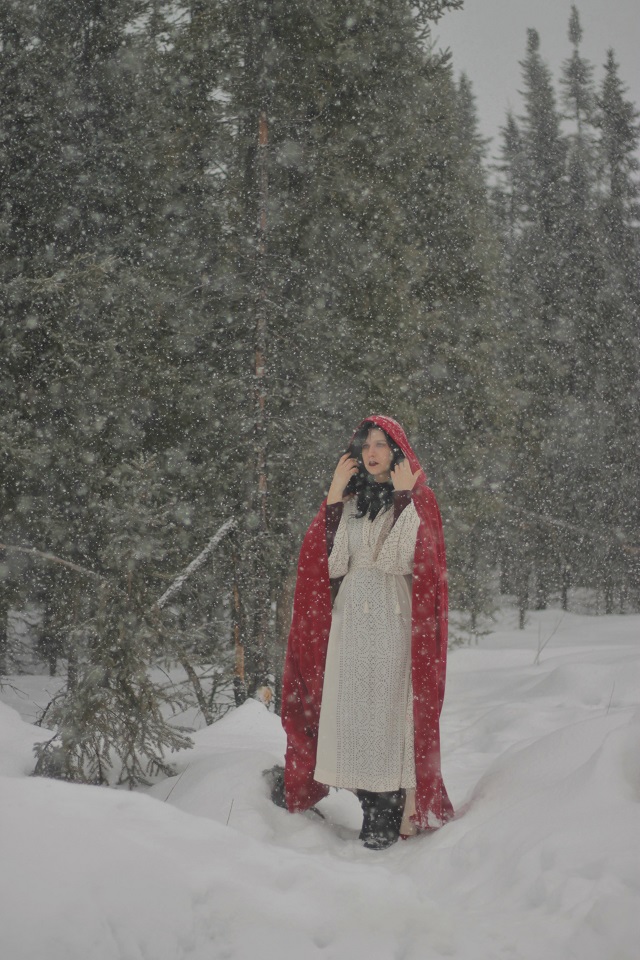